Going green has become a natural part of the curriculum for staff and students at Reynolds secondary.

And now that commitment to the environment has paid off, with Reynolds being selected as the third greenest school in Canada in a competition sponsored by the Canada Green Building Council and Canada Coalition for Green Schools.

“It’s exciting for the kids to get recognition for the work that they’re doing, and the school district as well, because part of this was things that have been done in the building as well,” said Reynolds leadership teacher Heather Coey, who also teaches a course on environment and sustainability. 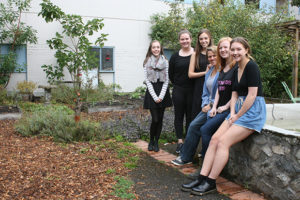 Coey said the school will use the honour as an inspiration to continue striving towards better educational practices and environmental stewardship.

Reynolds was recognized for a wealth of programs implemented at the school as well as the systems incorporated into the building itself.

“We have motion sensor lights in the hallway so if no one’s moving in the hallway the lights will automatically go off. All of our computers have automatic shutdown if they’re not being used,” said Coey, adding those standards have been adopted across the Victoria School District.

The school has also installed water fountains that can be used to fill water bottles and Reynolds was the district’s pilot school for recycling stations aimed towards reaching zero waste. The school holds a monthly recycling depot, and Coey is hoping to add a produce market to the depot in the future.

But it’s in the school’s courtyard where the commitment to the environment can really be seen.

“Recognizing that their school building, built in the 1970’s, was not designed to deliver environmental health and well-being, the school has extended their learning space to outdoor areas to achieve the health benefits of nature,” according to the green building industry experts from across the country who judged the competition.

The judges noted that by reclaiming their inner courtyard, planting both native species gardens and food gardens, the space is now used by students for free time, lunch, and before and after school.

“Our courtyard garden used to be mostly asphalt and Expo 86 benches and some large trees that were taking over everything,” said Coey.

The school worked with a Leadership Victoria group to get the funds needed to contract a landscape architect firm to design a sustainable courtyard space along with an ecosystem area in the front of the school.

“So now we have a fully functioning garden in our courtyard. We have now formed a partnership with City Harvest Co-op that works with our students to plant a full garden that then supplies our salad bar program,” said Coey of the program that provides an 80 per cent organic salad bar to staff and students once a week.

And the school’s appetite for a better environment doesn’t stop with salad, with Coey also initiating a chicken fostering program.

“We incubate and raise chickens every year and then we find people to give them to for backyard chickens to increase food security. We incubate in my classroom and we keep them there as long as we can tolerate the smell,” she said.

Coey has noticed the increased awareness and change in attitude the courtyard garden has produced.

“The kids sit out there to eat their lunch and then they see the produce being grown. When you can see it happening right before your eyes, I think even if you’re not directly participating in the organizing and planning, I think it still rubs off.”

And the changes introduced at the school also make their way into the students’ home life.

“I’ve had parents call and ask for recipes from the salad bar and ask where we source our produce from. And that they can’t possibly throw anything in the garbage anymore because little Susie says, ‘No, no, no, you have to recycle this.’ So yeah, I think it definitely has a spreading effect,” said Coey.

Reynolds students are also taking steps to ensure the school’s commitment to the environment continues with those following in their footsteps.

“For the last three years we’ve brought students from Braefoot elementary and Lake Hill elementary schools to do workshops in our courtyards and see the chickens, and we’ve gone there,” said Coey. “I think the mentoring really reinforces the concepts and make them real for our students.”

Calgary’s Lord Shaughnessy took first place in the competition with Argyle Alternative High School in Winnipeg placing second. Launched in 2014, the Greenest School in Canada competition seeks to showcase kindergarten to Grade 12 schools across the country that exemplify how sustainability can be woven into the infrastructure, culture and curriculum of a school.